Sometimes, you just need to keep a drink cold and that’s where the best ice cube trays come in.

You don’t want to spend a fortune on a new ice maker just for your favorite smoothie and so, you opt for an old favorite, instead.

Cheap and cheerful, they may be, but ice cube trays make plenty of ice and they do it well and that’s all you need.

So, check out the best of them and don’t worry, none of them will break the bank.

Four trays for a very fair price and with lids to prevent contamination, an excellent choice.

Sometimes, you just want spherical ice and when you do, you want these Ticent Ice Cube trays.

Bright and summery and they stack easily and if you know the trick, very easy to empty.

This value pack of 4 Omorc Ice Cube Trays is exactly what most family’s will want.

You can make 52 ice cubes at a time and the trays are completely safe to use in the dishwasher too. 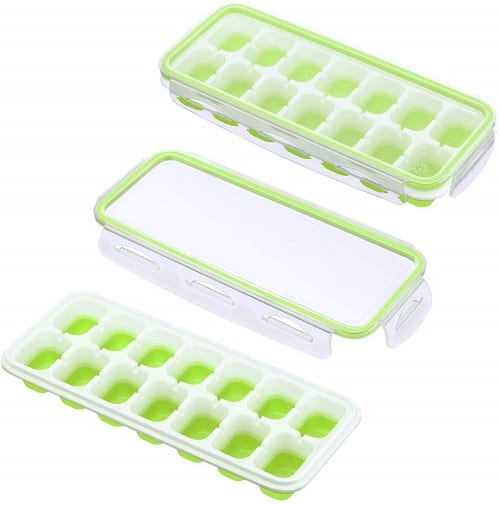 Quick Fact: The plastic used in the Omorc Ice Cube trays is completely BPA-free which means that you get a nice clean ice cube that won’t risk your health.

1. You get four in a pack which makes plenty of ice cubes
2. Very reasonable price per tray
3. They are completely food safe

1. Some users say that these trays are a bit fragile for long-term use
2. You’ll need the lids in order to stack them in the freezer
3. They can take a little while for the water to freeze

If you want large spherical ice cubes then you want some Ticent Ice Cube trays.

There are two trays in the pack and one makes slightly smaller spheres than the others.

It’s very easy to get the ice out of them when they’re ready. 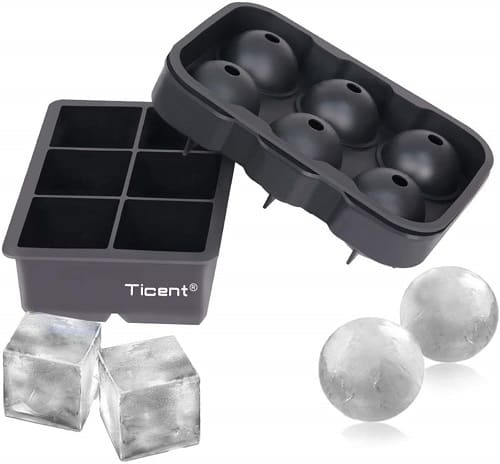 Quick Fact: These ice cube trays are made out of silicone which means they are very flexible and can easily be placed in a dishwasher without risking their integrity.

1. Big ice cubes perfect for a bourbon sipped neat
2. You can freeze fruit juices in this too
3. You can clean the product in a dishwasher

1. You may find you spill water when moving these trays around
2. They are a little difficult to fill
3. The spheres aren’t perfectly spherical

You can make up to 56 ice cubes at a time and the trays stack easily as long as you have the lids.

Quick Fact: If you want to remove the ice cubes easily from the Kootek Ice Cube Trays, it’s simple, run a little water over the back of the tray before emptying it.

1. You need to know the trick to get ice out easily
2. You can’t make good fat bombs in this product
3. Ice cubes are a little smaller than average

You only get two trays in the WETONG Ice Cube Trays pack but they do make 74 ice cubes in total!

As you’d expect they’re made of silicone and there’s no BPAs in the mix at all. 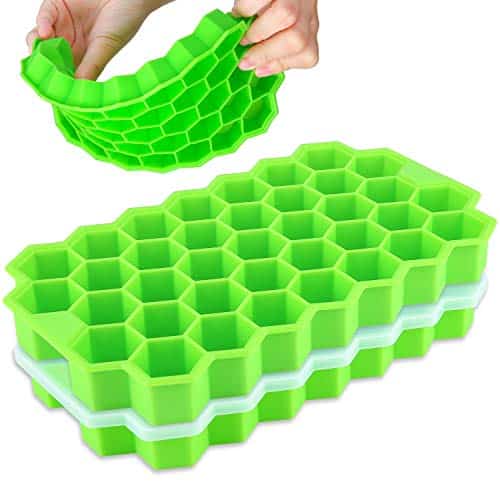 Quick Fact: The ice cubes that this tray makes are hexagonal not spherical or square! However, this does make it harder to fill than most trays too.

1. Comes with useful lids
2. Makes a lot of ice cubes
3. The ice cubes are super easy to get out

1. Hard to fill this product
2. Hexagonal ice cubes are ⅓ the size off an ordinary ice cube
3. Your fingers get cold pushing out all the ice

The Adoric Ice Cube Trays make large spherical ice cubes and while they’re not the cheapest tray, they are good value.

We like the black matt finish on these trays a lot too.

1. Makes large ice balls
2. Comes with anti-leak cover
3. Can be placed in the dishwasher

1. Spheres are still not perfectly formed
2. A little more expensive than we’d like
3. Must sit flat in the freezer to avoid spilling water

We prefer to use an ice maker, when we can, because it’s more convenient but there’s no doubt that these best ice cube trays make excellent ice cubes.

If you find yourself in the middle of summer in need of a cool drink and there’s no refrigerator nearby then ice is always welcome.