There’s one knife that everyone needs in the kitchen, a chef’s knife and it’s the ultimate chopping tool with more versatility than any other knife.

So, choosing the right chef’s knife is the home cook’s first priority and with that, in mind, we’ve put together a list of the best knives from home cooks.

None of the knives on this list are going to disappoint and each of them will last for years.

There is no single “best chef’s knife” and if anyone tells you there is, they’re having a bad day.

You need to consider:

We kept our choices to the standard Western-style (or occasionally a Western-Japanese hybrid knife) with an 8” blade.

We also kept the budget realistic with no knife on the list costing more than $200 and most of them coming in at much less.

Our Best Knives For Home Cooks

This Japanese made knife feels great in our average-sized hands and the blade is seriously sharp (in fact, the design is based on razor blades).

It’s very well balanced and we found that it was super easy to keep under control when cutting anything from meat to veggies.

Our only complaint is that a knife this nice ought to come in a decent package and instead, it’s just bundled in bubble wrap for shipping.

This German made knife is very reasonably priced and a bit heavier than some chef’s knives.

We’d look to incorporate this in a carnivore’s kitchen where the emphasis is on meat not vegetables as it’s not as competent at super-delicate work as some of our other choices.

We would note that some customers aren’t all that impressed with the handle grip on this knife but we liked it. 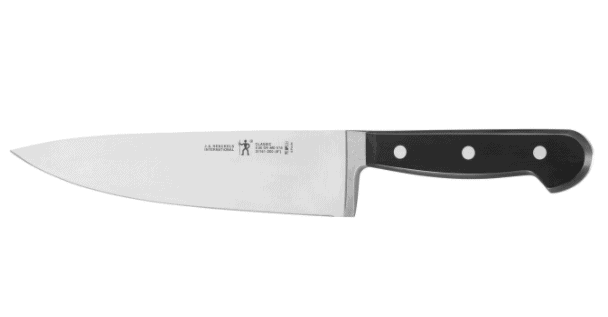 The vegetarian in your life is going to live the Global 8” Chef’s Knife as it’s very light and made of a single piece of metal.

This makes it a star at cutting up veggies in the most delicate and intricate patterns as needed.

It can tackle heavier jobs, such as cutting up meat, but it doesn’t excel at them and we’d only use it occasionally for this.

We would note that this knife has a small handle and it might not be ideal in huge hands.
You will definitely need a good knife sharpener to keep this knife at its sharpest. 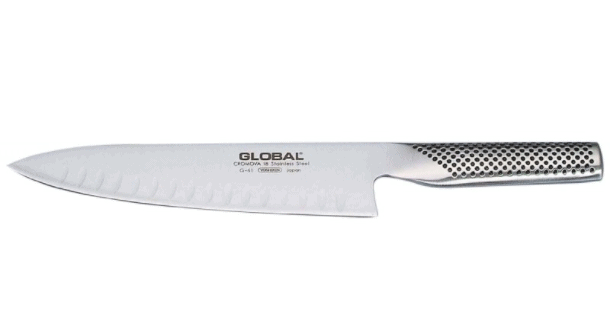 It has one of the biggest titles we’ve ever seen but the Mercer Chef’s Knife also has the smallest price tag and it makes our list because it represents spectacular value.

It’s made in the USA in a German-style and it’s a solid knife with plenty of heft that made short work of a chicken and handled most other tasks acceptably too.

It’s not great for the most delicate ingredients, mind you, and you may well bruise them if you’re not super careful with this knife.

Our only real complaint, at this price, is that the knife needs regular sharpening to retain its edge.

From low cost to the most premiumly priced knife in our round up, the Misono is, without a doubt, the most pleasurable knife to use on this list.

It’s light, agile and slices and dices with such ease that it’s almost like it does the work itself.

So, what’s the drawback?

Well, the knife is sharpened in a unique fashion to deliver an “asymmetrical” cutting surface and while this works brilliantly – it’s super hard to maintain unless you’re a professional knife sharpener.

So, if you have access to such a professional – go for it, otherwise, you want to pick something else from this list. 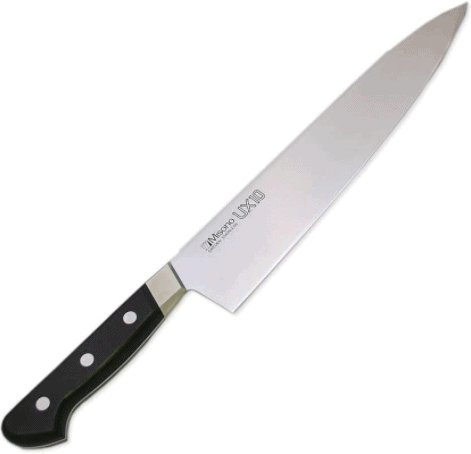 Final Thoughts On The Best Knives for Home Cooks

So, there you have it, the best chef’s knives for the serious home cook.

Any one of these knives will seriously up your culinary game but don’t forget to get a feel for what’s right in your hand before you buy.

If you’re still looking for more knife ideas why not check out these brilliant knife sets or these amazing electric knives?